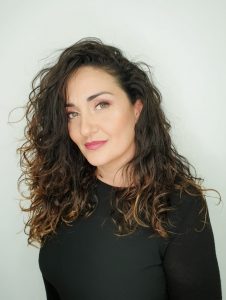 Sofía Terrón began her studies in higher aesthetics in 1998 at the I.E.S. Las Indias, in Santa Cruz de Tenerife. She completed her studies in Madrid, specializing in aesthetics, including professional makeup.

She combined her work in a beauty center with a master’s degree in thermal treatments and spa management. He decided to specialize in micropigmentation techniques, completing his knowledge in special and advanced techniques courses at the specialization center in Madrid. From this moment he decided to dedicate himself exclusively to the world of micropigmentation.

Since 2007, he has been teaching micropigmentation training courses and collaborating in carrying out various actions, representing the Spanish Micropigmentation Association in the Canary Islands.

In 2011, he opened Microcenter Tenerife, a center dedicated solely and exclusively to performing micropigmentation treatments.

Thanks to his professionalism, his work and effort, he has managed to become in 2012 the youngest member of the board of directors of the Spanish Micropigmentation Association.

Her entire professional career has been a constant improvement, and despite her youth she is recognized for being one of the best micropigmentation professionals in the Canary Islands, providing her clients with security, confidence and guarantee in the result of their treatments.

You can see enological micropigmentation here.

You can see cases of capillary micropigmentation here.

Would you like us to talk about your idea?
Reserve the date and time in the following form in just two steps:

Basic information on data protection.
Responsible: Renato Tatuajes
Purpose: Attend, manage and answer your questions and requests. Rights: You can exercise your right of access, rectification, deletion and others, as it appears in the extended information that you can know by visiting our privacy policy.

Do you have any questions?

You can contact us on social media, email, WhatsApp or telephone, on our opening ours:

We do not receive walk-ins in the study without previous appointment.